How Do Sizes of Drones Control its Applications? 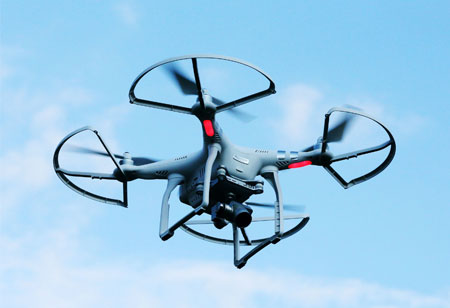 According to the varying sizes of drones, they serve specific purposes, and as the size varies, the complexity of the function of each drone increases.

Fremont, CA: A quadcopter or quadrotor or drone is a simple flying vehicle using four rotors, whose propellers are vertically oriented and works in varying speeds giving the vehicle some speed, desired thrust, and force to move the quadcopter in the air. They are the most advanced devices in today’s aeronautics, robotics, and electronics. As these drones are made of light composite materials, it helps reach great heights with reduced weight. For their excellent flight capability, these unmanned aircrafts are remarkable. When equipped with additional equipment like cameras, GPS guided missiles, Global Positioning Systems (GPS), sensors, navigation systems, and more, they can be used in varied applications. Also, these advanced drones can hover for hours in the air. They come in a wide range of shapes, sizes, and diverse functions.

Here are the different applications of drones associated with their sizes.

Nano drones are the smallest in the planet whose dimensions are similar to that of insects, while mini drones are up to 50cm in length with better features than Nano drones. The high-end mini drones can be used to click pictures and shoot videos and are controlled using apps. These drones are perfect for indoor flying. These drones are featured with Wi-Fi first-person viewing (FPV) with altitude hold and hover mode. Another great feature is the custom flight routes. Using a smartphone, a custom flight line can be drawn on the mobile screen such that the drone will fly in alignment with the flight line. These drones are mostly used in the film industry and also in face to face interview shoots.

Drones of small sizes are popular in the market for their excellent features and are more affordable than others. Their dimensions vary between 50 cm and 2 m and are available to average customers. These drones can cater to the needs of aerial photographers and can be widely used for both indoor and outdoor applications. Some of these drones can be used only with a smartphone that does not come with a controller or transmitter and is controlled directly through certain features in mobile applications that can be downloaded from Apple Store or Google Play. These drones are best suited for beginner fliers, as it is relatively easy to control and fly.  When incorporated with GPS, these drones provide capture location information.

Drones whose size ranges between 5 and 10 m falls under medium-sized drones. These drones can be used for transportation to remote places as they can carry up to 200 kg of weight.  They can be controlled via Android smartphones and iPhones via Wi-Fi connectivity. With FPV transmission features, it allows sharing aerial photos and videos instantly on social networks. The vast majority of military drones, the “workhorses”, are medium-sized or medium-range flying robots and is used for surveillance purpose.

Large drones resemble aircraft and are commonly used for military applications. Those places that cannot be accessed with regular jets are usually captured with these drones. It is evident that they are the primary device for surveillance applications. They have high lift capacity that can be used in rescue to deliver goods and foods during natural calamities. It allows for mounting additional modules for its increased lift capacity. Apart from military applications, their use is expanding to scientific, commercial, recreational, and agricultural and others, such as product deliveries, smuggling, policing and surveillance, aerial photography and drone racing

Drones have their applications in numerous areas and are also growing day by day for their extensive capabilities.