How can Drones Help CIOs Replace Human Labor across Industries? 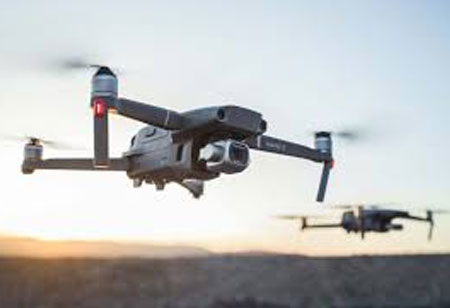 FREMONT, CA: The constant evolution of drone technology enlightened by the spark of new innovative ideas renders it to serve a variety of fields, including photography, commercial, industrial, construction, agriculture, medical and emergency, and many more. The drone is also known as an unmanned aircraft and is formally referred to as unmanned aerial vehicles (UAV) or unmanned aircraft systems (UAS). In other words, these are relatively small-sized pilotless aircrafts remotely controlled, or software controlled that can fly autonomously. Initially, these drones were designed to address the unmet needs of the military. With technological advancements, these drones are also used in many civilian roles, ranging from search and rescue, traffic monitoring, weather forecasting, surveillance, business-oriented services, and even delivery services.

Here's how CIOs can better opt drone technology to address their business needs quickly and efficiently, while replacing humans as these drones eliminate man-made errors and produce accurate results.

Drones enable spying areas without the active participation of humans to reduce risks. As drones are harder to see, tiny and less distracting, they can monitor big crowds at gatherings and in place of protests. Built with the ability to hide in critical situations, drones can be deployed for prison surveillance and private and police investigations. These drones are quicker to deploy and less expensive,  and are used for monitoring wildlife, thereby preventing poaching. Principally, drones are used in accident surveillance and monitoring road traffic, proving their applications are endless. In recent times, quadcopters are recognized a lot in this respect of surveillance and security that companies tend to adopt them for their stability and massive payload capability.

Aerial photography is one of the primary usages of drones. The withholding capacity of the drones has been tremendously improved so that quadcopters can be designed with heavy camera equipment. It allows clicking clear pictures from high altitudes. Drones are also revolutionizing the film industry. The developments in the video-capture quality along with the programmed abilities to tilt to different angles at the event of capturing videos and images make the drone to be utilized in aerial filming as well as broadcasting live videos.

Drones put the civil industry at the forefront, enabling less participation of humans. As continuous monitoring in many ways like surveying, employees monitoring, inspections and showing the customers an aerial look of the construction progress without actually stepping into the site, drones can pave the way for developing the infrastructure at different levels. Thus the aerial monitoring can enhance the original idea of construction in the 3D modeling. This is the reason customers prefer construction companies that are using aerial photography. Apart from being an excellent construction tool, technology also acts as a marketing tool in selling a project.

The act of timely delivery of food and other essential supplies of the drones is amusing people from across the world. Primarily, companies like Amazon, Dominos, and FedEx are starting to employ drones for transport of items to avoid delayed delivery by humans. But this application is in the testing phase, and will soon be commercially used. This application enables shipping of the products anywhere. However, these drones cannot be practically applied without authorization by the FAA. Reliability and safety being the two challenges that are yet to be addressed, innovative techniques have to be introduced in this regard.

Drones used in the agriculture field provide thorough insights into the crop performance at low cost without affecting the environment or fields. This results in an increase in the yield and ensures the growth of healthy crops. Notably, these drones are used for spraying pesticides, monitoring the physical conditions of the field, soil and field analysis, get rid of the crop-eating birds, and perform other jobs. Utilizing the quadcopter drastically reduces the period for a particular work carried out in and around the fields. DJI Smarter Farming Package is one of the best and popular farming drones, helping farmers work smarter by providing everything farmers need to monitor their crops, plan their farming strategies, all while keeping an eye out for issues.

Drones are providing valuable inspection details of equipment, water, power lines, and road. Eventually, they can access cluttered areas mainly to mitigate the perplexity associated with the numerous construction lines in buildings to collect hard to reach information. Quadcopters can be used in guardrail inspection, bridge inspection, and also aircraft inspection. It can check the airplane without involving manual checking. Of all the inspections, drone inspection provides increased quality and efficient inspection process owing to the HD videos and images. Also, drones have recently been used to collect air samples and aerial pictures of volcanoes to study them.

Drones have numerous applications in the defense, tactical, military, and modern warfare world. They can easily access the suspected areas. They can maneuver through hazardous locations and save lives by detecting bombs and give information about the unexploded bombs. Defense sector uses these drones to conduct surveys to ensure the safety of a place and the people. The role of drones is extensive, including combat search and rescue, carrying out remote attacks, control communication, target acquisition, and reconnaissance capabilities. UAS is increasingly finding its applications in solving certain conflicts and the execution of high-profile attacks.

A huge breakthrough is the penetration of drones into the medical field, and it is interesting that scientists exclusively work in the area of prevention. For example, drones helped in collecting information about malaria-prone regions. Certain drones are used to deliver medical kits during emergency situations avoiding the need to wait for the arrival of the ambulance. Provided with two-way interaction ability either by audio or video, doctors can quickly figure out the condition of the patients and provide suitable medication. In situations like immediate organ transplantation, drones built with the GPS module serve the purpose through their speed and the size to carry the organ between hospitals of different locations.

Many businesses have begun to utilize the capabilities of drones to significantly raise their business output concerning different aspects, as mentioned earlier. Thus, from agriculture to security, UAVs are offering ubiquitous connectivity and interactivity, which are the growing demands in this “ever-connected” world.

Check This Out: Top Compliance and Safety Companies